10 Clues That You Need Sleep Apnea Therapy in Fresno 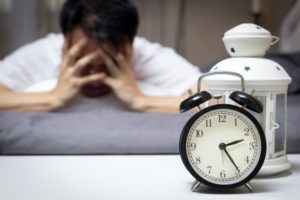 One of the best ways to heal the body and allow it to rest and recover from the daily grind is to have a good night’s sleep. If you’re not able to achieve that, then you may endure some side effects, and it’s important to know what they are so you can receive sleep apnea therapy in Fresno. As you continue reading, your local dentist provides 10 clues that you should be on the lookout for.

What is Sleep Apnea?

Sleep apnea is a condition that causes frequent interruptions in your breathing while you slumber that result in signals being sent from your brain to your nervous system that alert you to wake-up. Because this can happen several times throughout the night, people who suffer from this condition miss out on valuable rest.

One of the symptoms of not getting adequate rest is depression. It can manifest as feeling down or sad or even bouts of crying. You may even notice changes in your appetite, where you’re suddenly either hungrier or less interested in eating at all.

If you notice that it becomes harder to focus your mind throughout the day, then it may be a sign of sleep apnea. Sometimes called “brain fog,” this clouded thinking is the result of the restricted airflow during sleep that prevents the brain from performing its nightly maintenance, part of which is to clear away debris in the neural pathway.

When this function is hindered, it’s the equivalent of having cobwebs covering the walls of a room.

Men are uniquely affected in that they may have issues obtaining and maintaining an erection due to sleep apnea. Part of the problem can be that their blood flow has been compromised because of the lack of proper oxygen while they sleep.

Another result of poor oxygen circulation associated with sleep apnea is that it can cause the blood pressure to elevate and can lead to hypertension (an acute case of high blood pressure). Studies have shown that sleep apnea can still cause this problem for men even if they are taking multiple medications for their hypertension.

Sleep apnea can also lead to a problem called nocturia, which is when men frequently urinate throughout the night. Researchers have found that one of the contributors to this condition is sleep apnea, which can interrupt the release of the anti-diuretic hormone (ADH), which controls how much urine is released at night.

Another possible sign of sleep apnea is bruxism, which has become more common with the population. In some cases, it is the body’s attempt to clinch the jaw to prevent the throat collapse that contributes to Obstructive Sleep Apnea (OSA). If not treated, this can lead to a dental emergency or other problems like headaches and temporo-mandibular (TMJ) disorder.

Additionally, sleep apnea can cause gastroesophageal reflux (GERD), also called heartburn. This can be brought on by the relaxation of the muscular ring at the base of the esophagus, which then allows acids from the stomach to enter the food pipe and cause serious irritation. This can be exacerbated at night when the throat muscles collapse from sleep apnea and create a pressure vacuum that prematurely forces the food pipe to open.

One of the stranger signs of sleep apnea can be sleep walking, which can be brought on by the brain functioning in a mixed state in which wakefulness and sleep exist at the same time. This can be caused by the fractured state of mind that sleep apnea can create.

When you’ve received the recommended amount of sleep and still feel lethargic, it may be a sign of sleep apnea. As mentioned earlier, this is caused by waking frequently throughout the night. It’s important to be careful about driving if you suffer from this problem.

A final side effect of sleep apnea is that it can leave your mouth extremely dry while you sleep, which can lead to loud snoring and drooling.

If you notice any of these symptoms, then you should immediately reach out to your doctor and dentist in Fresno to get the help you need. With the right treatment, you can tackle this issue and take steps toward improving your overall health.

Since 1991, Dr. Byron Reintjes has been providing the Fresno area with the absolute best in dental care. He helps patients overcome the pitfalls of sleep apnea with oral appliances at his private practice, and he can be reached for more information through his website.

Sorry, the comment form is closed at this time.